The Hermitage lagoon, which begins south of Saint-Gilles-les-Bains, is often considered the best snorkeling location on Réunion Island. Protected from the swell by a coral reef, its gin-clear, shallow waters dotted with corals allow fantastic snorkeling. While swimming on the surface of the water, you will spot hundreds of tropical fish and sometimes young sea turtles.

How to go snorkeling in Lagon de l’Hermitage?

The beach lies south of Saint-Gilles, and is easy to reach by car. Follow the “Hermitage” signs on the coastal road (former national road, N2001) or the N1 expressway (Route des Tamarins, exit “Hermitage”). A large shaded car park, planted with casuarina trees, gives direct access to the spot.

From the car park, turn right and walk along the beach for a few minutes. On foot, from Saint-Gilles-les-Bains town center, go past the marina, then walk south along Plage des Brisants for about half a mile (600m).

You can enter the water anywhere along the beach, but you might prefer the central part – the further you go towards the right, as you are facing the sea, the shallower the water is.

In places, the sand is replaced by relatively slippery rocky areas, so you should be careful not to walk on them. Do not enter the Strict Nature Reserve/Wilderness Area, marked with yellow beacons (see map).

The area to explore is located between the beach and the coral reef, which are distant from 350 to 500 yards. The further you go to the right, the shallower the water is and the less coral you will see (replaced to the north by seagrass meadows – see map). The further left you go, the closer you will be to the channel, which is a hazardous area because of strong currents.

In this part of the lagoon (entirely listed as a marine reserve), a total protection zone (with access strictly forbidden) is set off by yellow beacons. The information signs along the beach will let you know where you are.

As you move away from the beach, you cross 100 meters or so of sandy seabed with scattered coral areas (↕1.5-6ft/0.5-2m), which grow denser as you move closer to the reef.

Make your way between the coral to reach the more preserved areas. 100 meters before the reef (↕1.5-3ft/0,5-1m), the coral becomes so dense that you can’t go any further, while the water level gradually falls.

In this area of the lagoon, the seabed is the best preserved. The diversity of coral is striking, and a large amount of sea life is drawn to the coral areas. Lagoon triggerfish, shoals of convict surgeonfish, cornetfish, octopus, and squid are easy to see.

While exploring the lagoon, you may come across a lionfish, a stonefish or a false stonefish, which is hard to distinguish from the rocks. Fire coral, which can sting, can also be found in some places. Don’t touch it, and as a preventive measure, don’t touch the rocks with your hands or your swimfins either.

At the northern part of the spot, you’ll find shallow seagrass beds, where immature green sea turtles occasionally come to feed on.

Acropora branching coral is the most prevalent in the lagoon. It is spectacular, but also highly fragile, and can be broken by a passing swimfin. Watch where you are going, especially when your way lies through narrow or shallow passages.

The lagoon can be explored at almost any time of year, since the waters are particularly well sheltered. In winter the wind forms waves that may make your return to shore more complicated.

There is a wide range of accommodation and restaurants on-site. Le Récif*** and Le Relais de l’Hermitage*** hotels directly overlooks the beach. A large number of food trucks and snack bars are dotted along the beach and the road alongside it, so you can get something to eat and drink at low prices. 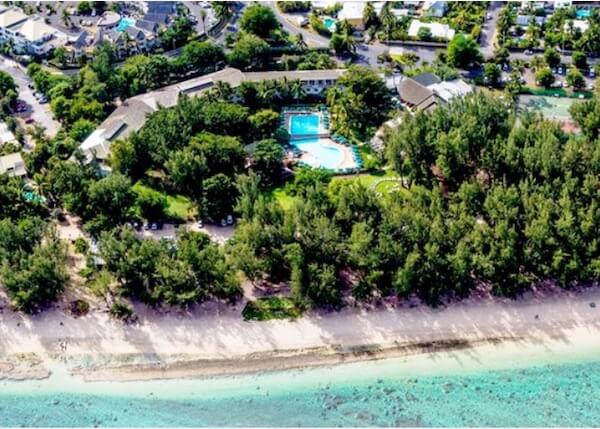 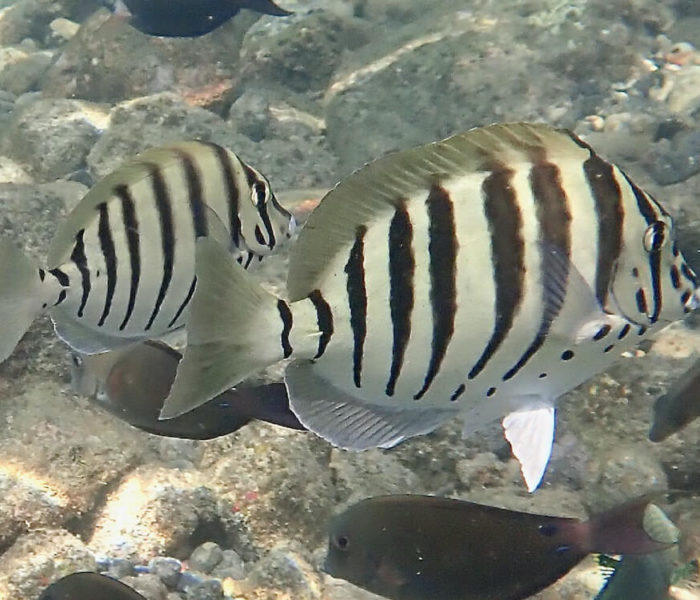