Green Island, located on the inner Great Barrier Reef, is one of the most accessible snorkeling spots in Cairns. Bordered by coral reefs and seagrass beds, the small island allows you to explore various underwater environments. From a few steps from the beach, we can meet green turtles, giant clams, fluorescent corals, and fish of all colors.

How to reach Green Island?

Green Island is accessible mainly from Cairns in about 45 minutes by boat. Several companies offer simple transferts to the island (about AUD100 per person round trip, various schedules available). Combined excursions to Green Island and the outer reef are also offered. If you choose this option, know that the stop at Green Island lasts about 2 hours, which leaves enough time for a nice snorkeling before joining at the Great Barrier Reef. These combined trips cost around AUD250 per person which includes lunch, as well as snorkeling equipment and sting suit. In these two types of excursions (Green Island alone or combined with the outer reef), you will be free from your activities once brought on the island. It is also possible to stay on the island at the Green Island Resort. In this case, the hotel will organize your transport to the island.

Getting into the water to snorkel around Green Island

Two separate areas of Green Island are recommended for snorkeling. In both cases, you will enter the water from the beach. To access the western zone (zone 2 on the map above), enter the water at nearly the foot of the dock, as the water level on the reef flat is too low.

There are two areas recommended for snorkeling at Green Island:

1/ The area facing the main beach, located north of the island (zone 1 on the map). We reach the beach on foot in about ten minutes from the dock (well signposted). The seafloor has mainly seagrass beds, but also some coral areas that attract many fish, including parrotfish, six-banded angelfish, batfish and snappers. The water level increases gradually from the edge, at 4m to about 200m from the beach, near the orange buoys. It is in these remote areas that you will most likely see green turtles (though they are sometimes spotted closer to the shore).

2/ The fringing reef which extends to the east of the island, south of the dock (zone 2 on the map). This is the area you see on your right when you land at Green Island. Here, a shallow reef flat extends from the beach to a small reef front at about 150m from the edge. The reef flat allows some interesting views (of triggerfish, blue starfish, etc.) when the height of the water is sufficient enough for snorkeling over it. However, it is at the front of the reef (↕1-3m) that the underwater life is the most dense: angelfish, parrotfish and schools of surgeonfish gravitate around multicolored corals and giant clams. Be careful because the front of the reef is also the area in front that maneuvers the boats to land on the dock. Make sure to stay away from this area.

The Green Island Resort is the only accommodation on the island. Day visitors can access the hotel’s restaurant and several shops. 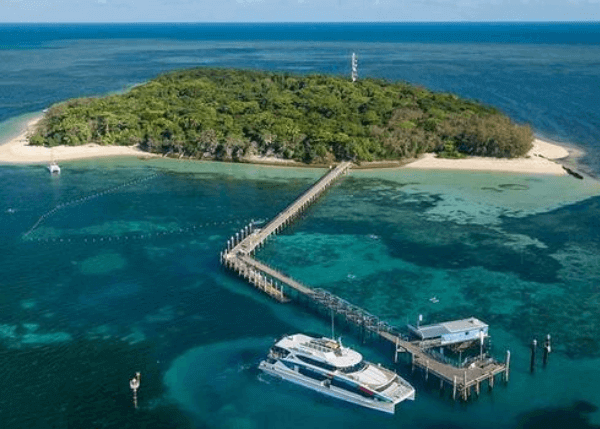 This eco-resort offers luxurious suites on a tropical island in the Great Barrier Reef. Set amidst lush rainforest, the spacious suites feature private balconies with either rainforest or pool views. All of Green Island’s 46 suites are air-conditioned and have bathrooms with a separate bath and shower. Green Island has 2 swimming pools and a poolside bar. The resort’s Day Spa offers a variety of spa, massage, and beauty treatments in the treatment rooms, restaurant offers award-winning tropical cuisine on the outdoor terrace or in the air-conditioned dining room.

see all spots in Queensland & the Great Barrier Reef