Dhiffushi is a small inhabited island in the North Male Atoll. If you stay there, do not hesitate to head off on the discovery of the small coral reefs overlooking the western beach. Access to this reef is open and free. It is an ideal spot to practice snorkeling before going on a organized snorkel in more challenging waters. If the corals are sadly very damaged, Dhiffushi seabed hosts hundreds of tropical fish, which can be observed only a few meters from the shore.

How to get to Dhiffushi snorkeling spot?

Dhiffushi is a small inhabited island on the eastern tip of North Male Atoll, about thirty kilometers North of Male. Not to be confused with the island with the same name, located South of Ari Atoll, close to Maamigili.

To reach Dhiffushi island from Male and the international airport, you can choose between the ferry ($3/pers., 3h) and the speedboats ($35/pers., 50 min.). Meeru Island, where Meeru Island Resort& Spa can be found, is located just a few hundred meters away North of Dhiffushi.

The spot can be reached from the public beach at no charge.

For exploring zone 1 on the map below, access from the Dhiffushi Inn Bikini Beach Club is most practical. The spot is 150 meters from shore, but you can walk in the shallows right up to the drop-off leaving only 20 meters or so of swimming to reach the small reef outcrops.

Walking to the spot entails mostly knee deep to waist deep water. Stay on the sandy patches and avoid the small rock outcrop that can be seen from the beach. Sharp-edged concrete can spoil the day. Lionfish are also found here so take care when wading off the sandy patches.

For exploring zone 2, in order to be as close as possible to the reef, we recommend that you get into the water from the beach, close to Crown Beach or Café 420.

There are two main recommended snorkeling areas in Dhiffushii:

1/ The small healthy pieces of coral can be found on the southern part of the beach (zone 1 on the map), as the outer wall protects it from the surf. As you enter the area from the sandbank there is a steep deep drop-off, but after a very short swim, the reefs outcrops will be reached. The depth of the reefs varies from 3 to 12ft/1 to 4 meters. Please take care not to damage the small amount of healthy coral.

2/ The small reef close to the northern tip of the beach (zone 2 on the map). Other nearby reefs can also be explored, but the water tends to be less clear as you swim with fins towards south. Do not enter the channel which serves the harbor, as there are many motorboats navigating on it.

In zone 2, leaving the beach behind, you’ll first cross sandy areas and seagrass beds before reaching a shallow reef flat (↕3-6ft/1-2 m). The corals are very deteriorated here, with only a few digitate, Porites and Pocillopora coral patches. A few hundred meters away from the beach, the reef flat reveals a better-preserved reef wall, where we can find beautiful coral areas and some caves.

Dhiffushi reef allows visitors to spot a wide variety of fish, the most common being the triggerfish, the butterflyfish and various species of damsels. On the reef flat, try to spot the small Schultz’s pipefish, which can be easily seen here.

On the deeper areas, you may come across some schools of humpback red snappers and bluestripe snappers. The luckiest might also spot an angelfish, small groupers, lionfish or even moray eels, which shelters in the crevices of the reef.

This spot is generally well sheltered from waves and currents. A light north-south prevailing current (parallel to the coast) might form along the island.

Restaurants and accommodation in Dhiffushi island

Dhiffushi is an inhabited island, with about fifteen accommodation options. Rashu Hiyaa Hotel is located less than 200m by foot from the snorkeling area. Around the harbor and the beach, there are also several cafés and restaurants. 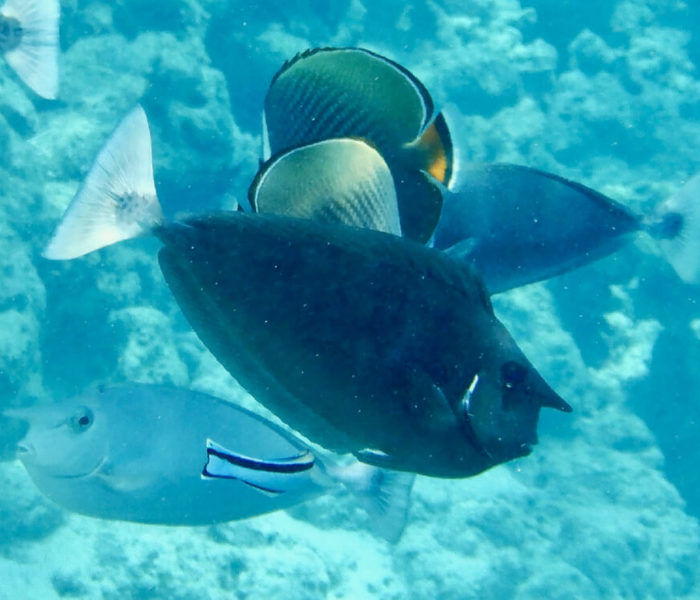 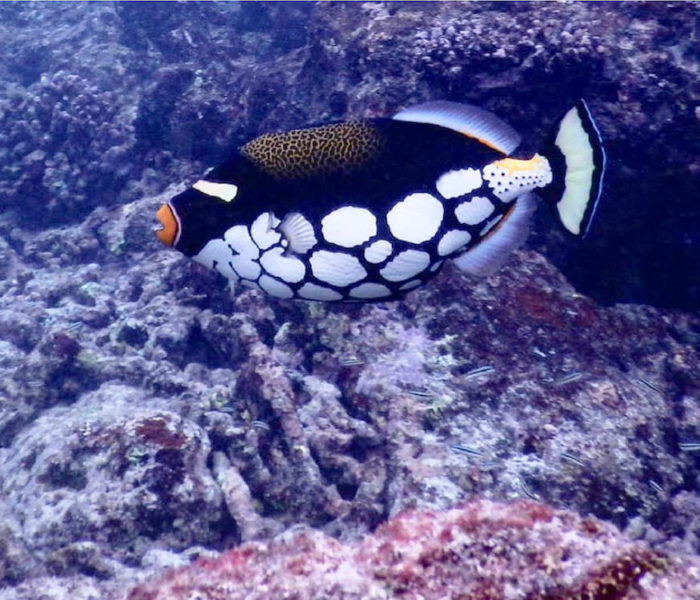 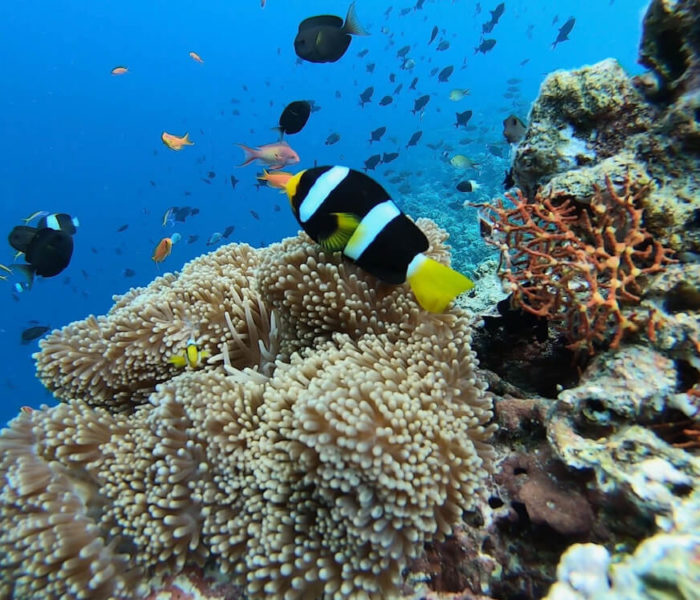 Reef flat and drop off with sharks, turtles and colorful fish 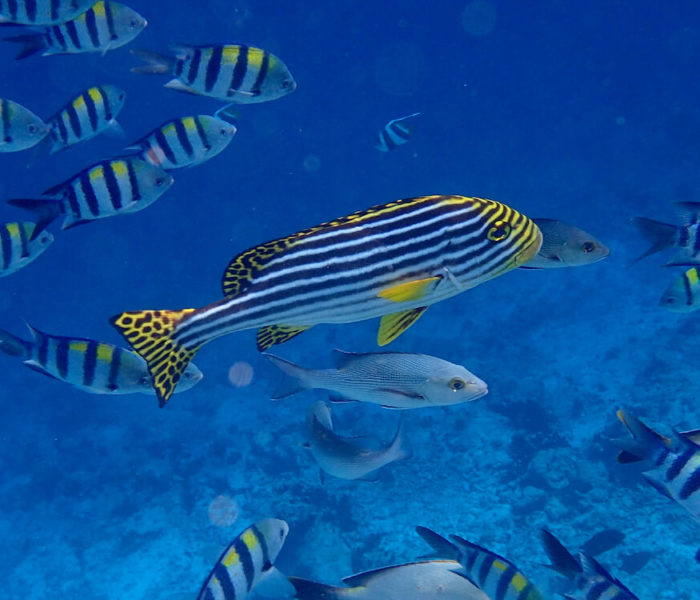