Vicente Roca Point is one of the most well-known snorkeling spots of the Galápagos islands. Located north of Isabela island, it is featured in the itinerary of numerous cruises organized around the archipelago, usually including a one-day stop. Although the spot is known for its high concentration of green turtles, sharks and rays can also be observed when underwater visibility is good.

How to get to Punta Vicente Roca for snorkeling?

Vicente Roca Point is only accessible by boat. Located north of Isabela Island, 200km away from the closest inhabited areas, the only way to visit the site is to go on a multi-day naturalist cruise on the archipelago. Make sure when booking that the site is included in the itinerary.

How to enter the water?

Drop offs are made directly from the boat.

Vincente Roca Point is renowned for its Galápagos green turtles, which are very numerous on the bay. Their concentration is so great that sometimes 5 or 6 turtles can be spotted in a row, floating on the surface of the sea and cradled by the waves. Others can be found peacefully resting on the seabed sand with their flippers retracted under their shell.

Along the rocky shore, you can often see Mexican hogfish, threebanded butterflyfish, and wrasses. Whitetip reef sharks, ocean sunfish and seahorses also inhabit the area, but aren’t so easily spotted while snorkeling.

During their snorkeling outing, the luckiest ones can come across a Galápagos penguin or a flightless cormorant (endemic on Isabela and Fernandina Islands), both of which have established small colonies nearby. Undisturbed by the presence of snorkelers, these birds can be spotted swimming on the surface of the water and surreptitiously diving into the water to hunt for food.

Underwater visibility on this site is very random, like many parts of the west coast of Isabela Island. It is not uncommon that snorkeling outings are cancelled due to poor visibility (due to overly green/opaque water).

Restaurant and accommodation nearby

Vicente Roca Point is an entirely natural site, which can only be visited by embarking on a multi-day and full board naturalist cruise. 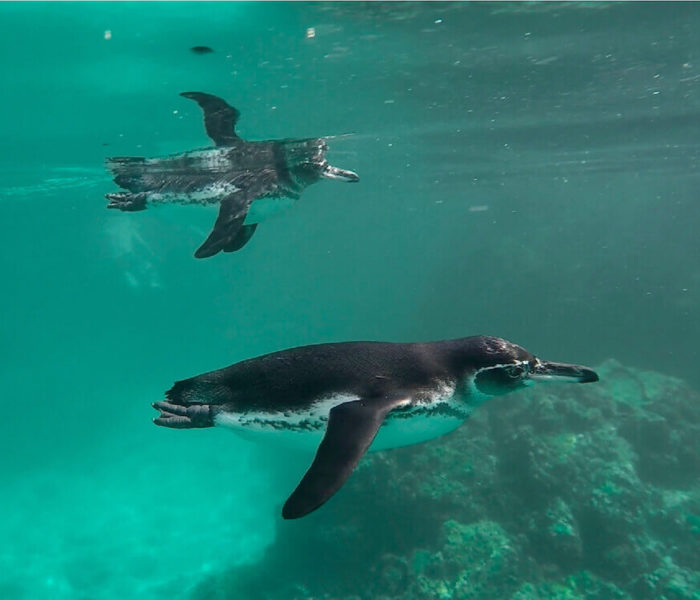