Located in a gorgeous, pristine natural environment, Oscelluccia beach (Plage de l’Oscellucia in French) is one of the most pleasant snorkel spots around Calvi. This small cove not only boasts turquoise waters sheltered from waves, but it also hosts various types of seabed and a great variety of fish species such as sargo, wrasses, salema and blennies.

How to get to Plage de l’Oscelluccia snorkeling spot?

Oscelluccia beach is located on the Revellata peninsula, about 3km west of Calvi. The fastest way to the spot requires a car: take road D81B towards Porto until you reach a parking lot set along the road (click here to locate the parking lot on Google Maps).

From here you will have to walk, taking either the gravel road towards the lighthouse (about 1 hour to the beach) or the small path along the coastline (45mn). The latter is not only quicker but also more enjoyable, as it offers gorgeous views of the peninsula’s east coast and its succession of small coves. Those not driving can walk from Calvi to the peninsula along a coastal path (7 km).

The first beach you will see in the peninsula is Alga beach. Even if the seabed is less spectacular and fish are less numerous than at Oscelluccia beach, snorkeling here is an option those lacking time, or not willing to hike, can consider.

Getting into the water to snorkel Plage de l’Oscelluccia

Enter the water directly from the pebble stone beach.

The best snorkeling areas are located along the rocky shores of the creek. We tend to prefer the southern side, on your right when facing the sea, along Oscelluccia point.

In the southern area, the seabed is mostly made of rocks and Posidonia meadows (↕6-15ft/2-5m). A lot of sea urchins cover it. Swim along the rocks, some of whom emerge from the water surface, and try to spot some of the numerous fish species that inhabit the creek.

Saddled seabream, mullets, and common two-banded seabream like this area. You will also see Mediterranean rainbow wrasses coming and going in small groups. Sea meadows are the wrasse’s territory: brown wrasse, five-spotted wrasse and ocellated wrasse can often be spotted there.

In the northern area (on your left when facing the sea), the seabed is covered with large pebbles and polished rocks (↕3-10ft/1-3m). Small groups of damselfish and ornate wrasse can notably be seen there.

Most of the time the sea is calm inside the creek, but consider staying at a distance from the rocks, especially if there are waves.

The beach is located in a completely natural area, without any water or food option. The walk back up to the parking lot can be hard during summer: make sure you bring enough water along with you. 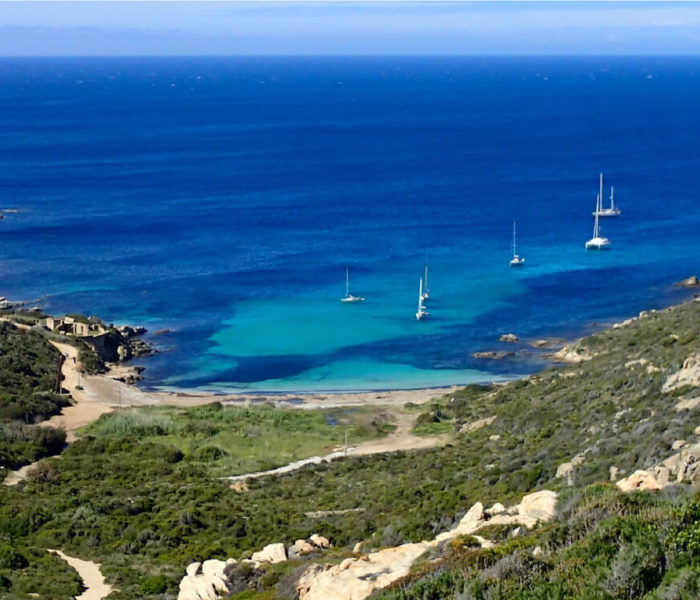 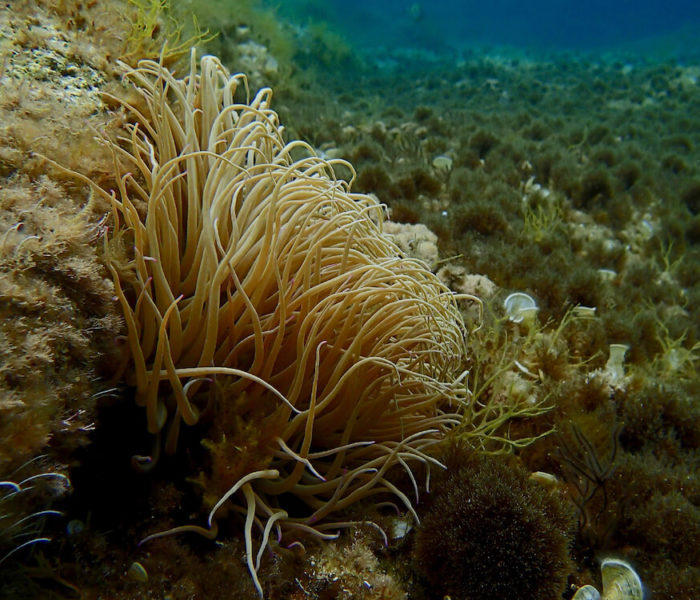 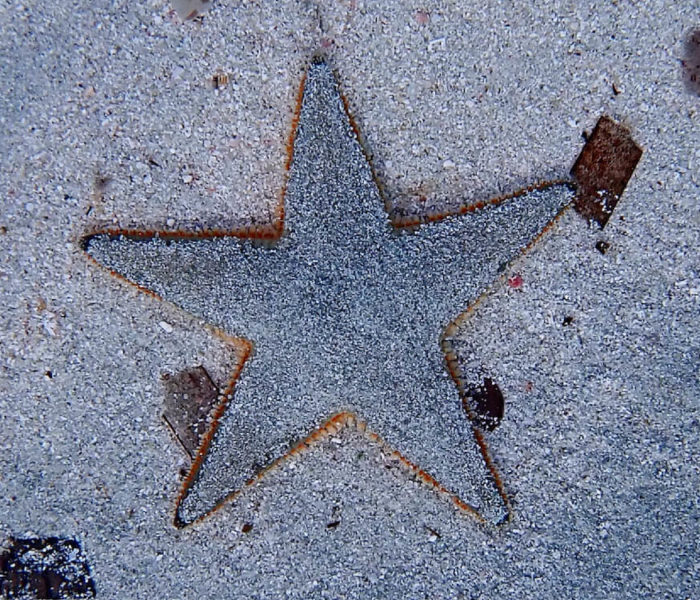 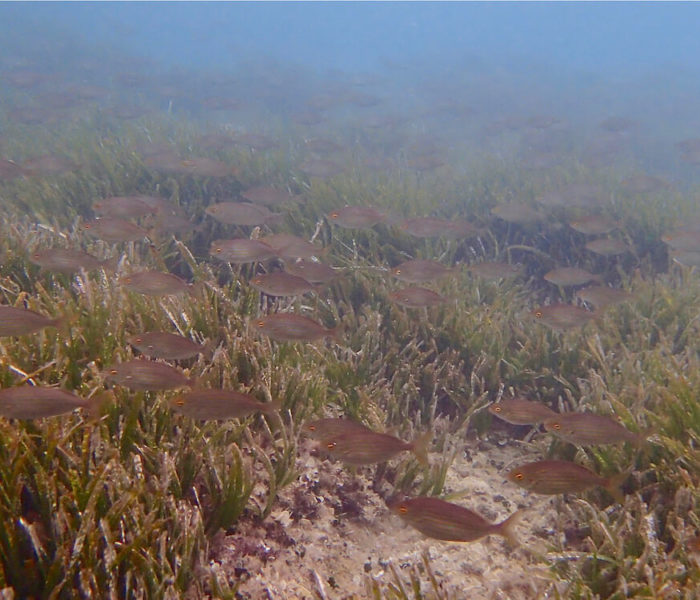 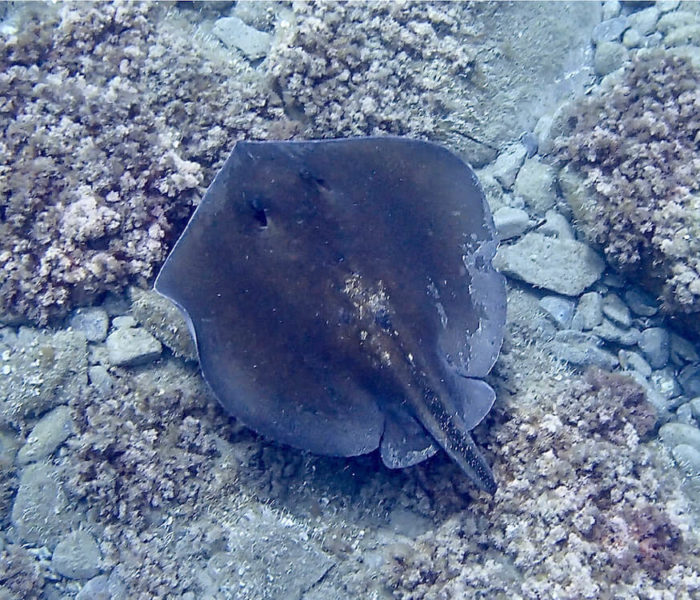 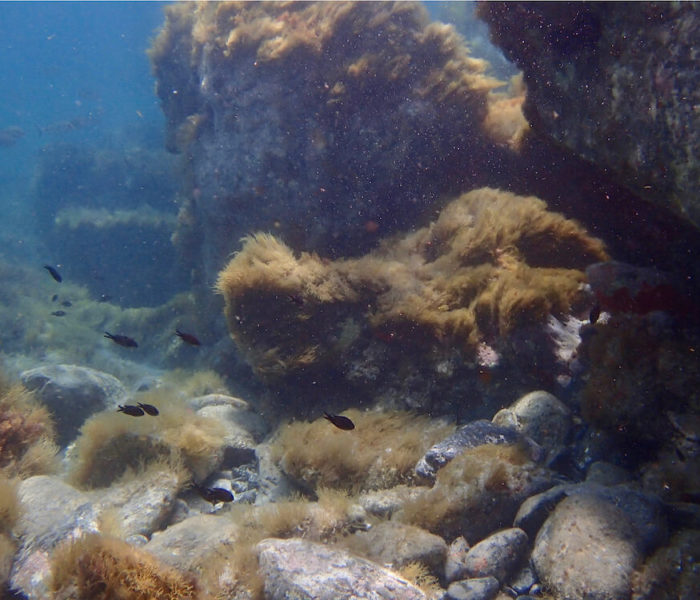 Rocky and weedy beds with a few fish