Home to one of the most beautiful beaches on Australia’s east coast, Fitzroy Island welcomes hundreds of day trippers from Cairns. Although the underwater visibility around the island (located near the coast) can be poor, don’t hesitate to admire its seabed if you’re spending the day there. There are dozens of reef fish species, some turtles, and small sharks that live on the reefs lining the island.

How to get to Fitzroy Island?

Cairns is the main departure point for boats to Fitzroy Island. The crossing takes about 45 minutes. Several companies offer boat rides to the island (about AUD80 per person, various schedules available).

Once on Fitzroy Island, you are free to explore the island as you want. It is also possible to stay on the island at Fitzroy Island Resort or in the campgrounds. In this case, your transport can be organized by the hotel.

Getting into the water to snorkel Fitzroy Island

There are two snorkeling areas around Fitzroy Island. The Nudey Beach area (zone 1 on the map) can be explored at high tide as well as at low tide. The water entrance is from the beach. However, snorkeling the dock area (zone 2 on the map) is tide-dependant.

In fact, at low tide, it is often impossible to get into the water without stepping on the coral (which is absolutely forbidden and dangerous). Make sure to check the tide times.

There are two areas recommended for snorkeling at Fitzroy Island:

1/ The small coral reef that borders the rocks at the north end of Nudey Beach (zone 1 on the map). We reach the beach from about a fifteen-minute walk from the dock (well signposted). Enter the water near the rocks. The reef begins just a few meters from the edge.

It is generally well preserved with beautiful colonies of hard corals forming a small drop off (↕1-3m/3-9ft). Parrotfish, butterflyfish, angelfish and wrasses are common at reef, which is sometimes visited by small whitetip sharks.

2/ The reef flat and reef facing the main beach of the island east of the dock, about opposite the resort (zone 2 on the map). If you find the beach to be less pleasant, this spot is the best place around the island to swim with green sea turtles. They are most often found in areas where depths are 2 to 4m (↕6-13ft), at the reef front (see map).

This spot is not devoid of coral which forms in places of pretty slopes where six-banded angelfish, small schools of snappers, and couples of rabbitfish abound.

The underwater visibility at Fitzroy Island is generally average and can worsen after heavy rains. As anywhere else on Queensland, wearing a sting suit is recommended, especially during the summer months.

The Fitzroy Island Resort (which also manages the nearby campground) is the only accommodation on the island. There is a restaurant that is open to visitors during the day. 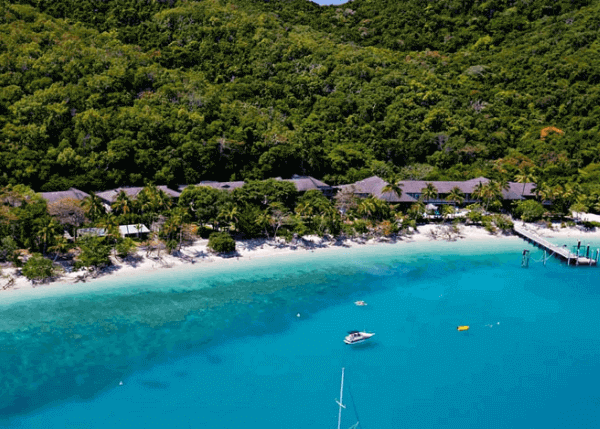 Located on a tropical island in Great Barrier Reef Marine Park, Fitzroy Island Resort is situated between the beach and the rainforest. Cairns is 45 minutes away by ferry. All rooms at Fitzroy Resort offer modern amenities including air conditioning and cable TV. Each has an en suite bathroom with shower, fridge, and tea/coffee making facilities. Guests can relax in the outdoor swimming pool with the bar or the in-house cinema. Walking trails lead through the rainforest and along the white coral beaches.

see all spots in Queensland & the Great Barrier Reef