Plage des Roches Noires is the iconic beach of Saint-Gilles, Réunion Island’s main seaside resort. On this spot open to the ocean, you can only snorkel when there is no swell, and inside the shark net. The area is small, but you can see a few fish, such as triggerfish, butterflyfish, surgeonfish, and sole. Snorkeling at Roches Noires is not worth the detour in itself, but rather fun if you are staying in Saint-Gilles.

How to go snorkeling at Roches Noires

Roches Noires beach is located in downtown Saint-Gilles-les-Bains. It adjoins the north dike of the marina. Swimming and snorkeling are only allowed in the small area protected by the shark net, and during times when the beach is supervised (generally from 10 a.m. to 5.30 p.m., every day). Do not snorkel if there is swell, if the flags are down, or if the swim flag is orange or red.

We suggest you get into the water to the far left of the beach, near the marina breakwater. You will be closer to the rocky areas, where there are the most fish.

You can snorkel in the entire area protected by the shark net. The area is quite small, 120m long at most. On the left, along the dike, there are rocky bottoms, with no corals (↕2-6ft/0.5-2m). Everywhere else, the seabed is sandy, with a depth of up to 10ft/3m along the net.

Most fish can be seen around the rocks, along the dike. Surgeonfish, especially the black-barred surgeonfish, the convict surgeonfish and the brown surgeonfish, appreciate these oxygenated areas.

Vagabond butterflyfish, dusky wrasse, lagoon triggerfish, and several goatfish species are also common here. Along the rocks, you can also see several varieties of sea urchins, and some turbans.

Sandy areas may not look as interesting, but go take a look anyway. You can sometimes see emblematic species of sandy bottoms, such as flounder or sole. Schools of mullets also visit this part of the spot.

There is a snack bar right on the beach, next to the lifeguard station. Otherwise, you will find many restaurants and snacks in the center of Saint-Gilles and on the seaside promenade, just a 150m walk from Roches Noires. 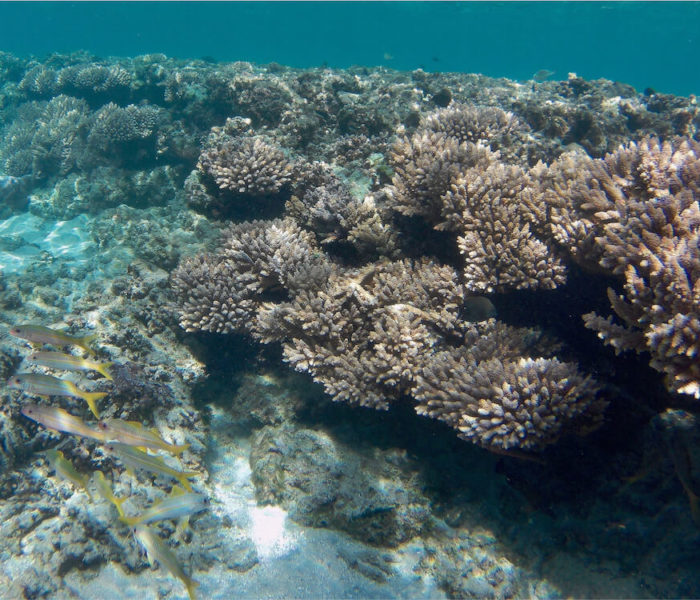