The three tiny Gili Islands, fringed by white-sand beaches and coral reefs, are among the most popular tourist destinations in Indonesia, and certainly one of the best snorkeling area in Southeast Asia. The crystal-clear waters of these paradisiacal islands, where turtle-watching is the star attraction, are the guarantee of exceptional snorkeling experiences. Gili Air is the closest of the three islands to Lombok, and certainly the quietest and most peaceful of the three Gilis.

How to get to Gili Air snorkeling spot?

You can enter the water anywhere along the sandy beach. You can snorkel all around the island, surrounded by coral reefs, but we particularly recommend you the area on the map below, known for the richness of its marine life and the regular presence of sea turtles.

The sea turtles (two species, the green sea turtle and the hawksbill sea turtle, are mostly observed in the Gilis) use to feed on the seagrass, sometimes a few meters only from the beach. You can also encounter them on the coral areas along the drop-off, especially at high tide.

In Gili Air, like elsewhere in the archipelago, the turtles have been long used to human presence and can be easily approached and observed. Avoid disturbing the turtles, which come to the area to feed and rest: don’t chase after them, don’t touch them, and leave them enough room when they come up to the surface to breathe.

While turtle-watching is the star attraction on the island, the other richness of the site should not be overlooked. Along a strip of ten or so meters along the reef drop-off, the seabed is covered by colorful soft and hard corals, even if some areas have been badly damaged in the past.

You will swim with hundreds of green chromis, scissortail sergeant damselfish and sea goldies. Sunburst butterflyfish (Chaetodon kleinii) is the most common butterflyfish in the area. Clownfish are present but remain rare. Try, instead, to spot a palette surgeonfish (Paracanthurus hepatus, the absent-minded blue fish from “Finding Dory”), that pays regular visit to the site.

The reefs were damaged in the past and are slowly regaining their former state. Don’t touch the coral and be careful not to break it with your swim fins. Watch out for boats that come and go on this site when you are exploring the drop-off area.

Restaurants and accommodation in Gili Air 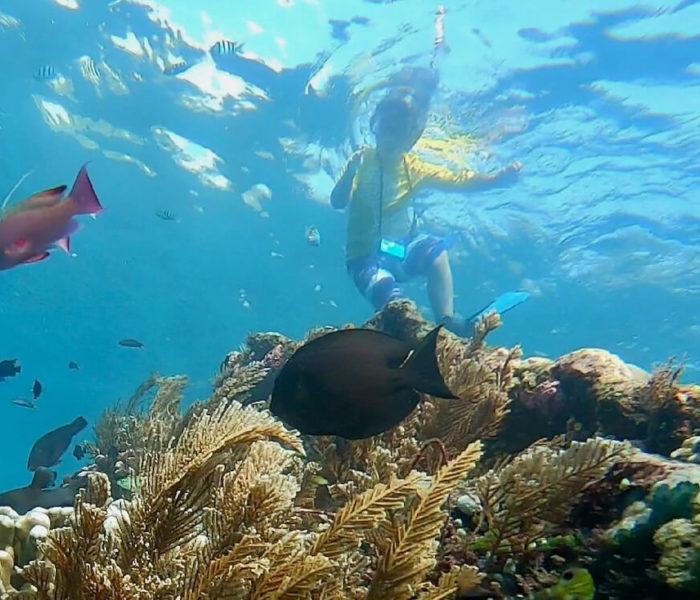