With its shallow archaeological and geological remains located a few tens of meters from the beach, Olbia offers a unique snorkeling experience. Between history and nature, you will be able to freely explore an old Roman wharf and a 19th-century wreck, around which many Mediterranean fish live.

How to snorkel the Archaeological site of Olbia

The archaeological site of Olbia is located in Hyères, on the northwest side of the Giens peninsula. The land site (open seasonally, entrance fee) extends into the water, in front of Almanarre beach.

There are plenty of parking spaces on both sides of the road. The most direct access to the seaside is located right next to Le Robinson restaurant, where stairs lead down to the beach, right in front of the spot.

On this side of the peninsula, the sea is rough (and is loaded with kite surfers and windsurfers) by westerly winds.

Water entrance for snorkeling the Archaeological site of Olbia

Get in the water from the north end of Almanarre beach, a little after Le Robinson restaurant. You will find yourself right in front of the area where the Roman ruins and the wreck are located.

The recommended area for snorkeling in Olbia is marked with yellow buoys. The Olbia Underwater Trail (which used to allow exploring the site by following an explanatory buoy route) appears to have been removed. The archaeological site of Olbia, though a small area, brings in several points of interest:

1 / The remains of a dock built by the Romans facing the city of Olbia (↕0-6ft/0-2m), founded by the Phoenicians in the 4th century BC. This wharf allowed boats to be unloaded directly onto carts.

The enormous stone blocks that make up the quay have been jumbled over time, but the structure of this impressive work is still very recognizable. The quay is located at a shallow depth, sometimes emerging above the surface.

2 / The wreck of La Tartane (↕12ft/4m), a freight transport boat that sank on the shore of Olbia around 1860. This rather recent wreck has no historical connection with the Antique site.

La Tartane sank with its cargo of stones, but parts of the wooden hull and keel are still visible. The position of the wreck is indicated by an orange buoy.

3 / A rocky sandstone base, called paleo-tombolo (↕0-6ft/0-2m), which extends between the beach and the Roman quay. These geological remains mark the old coastal barrier.

As you explore the historic remains of the site, you will come across many species of fish. Wrasse, for example, loves to swim around the large boulders of the Roman quay. In deeper areas (especially around La Tartane), sargo and damselfish are easy to see.

Le Robinson restaurant and the Funboard Center (a sailing school that also offers sandwiches and salads) allow you to eat right in front of the snorkeling spot. 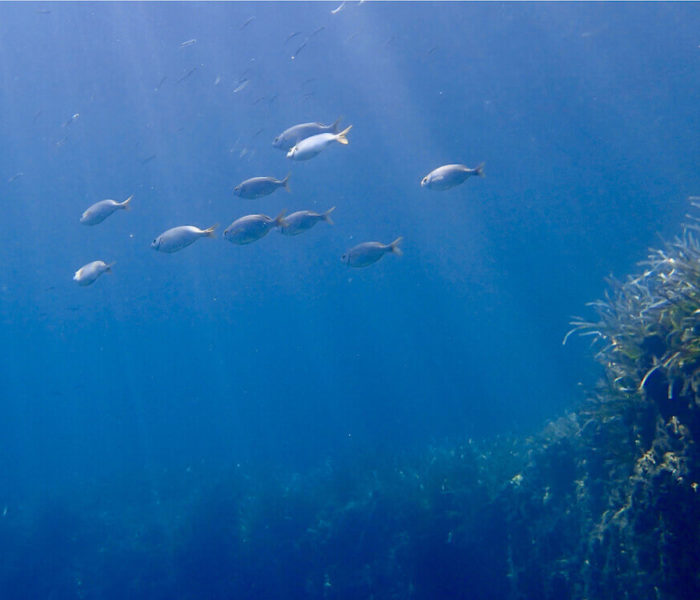 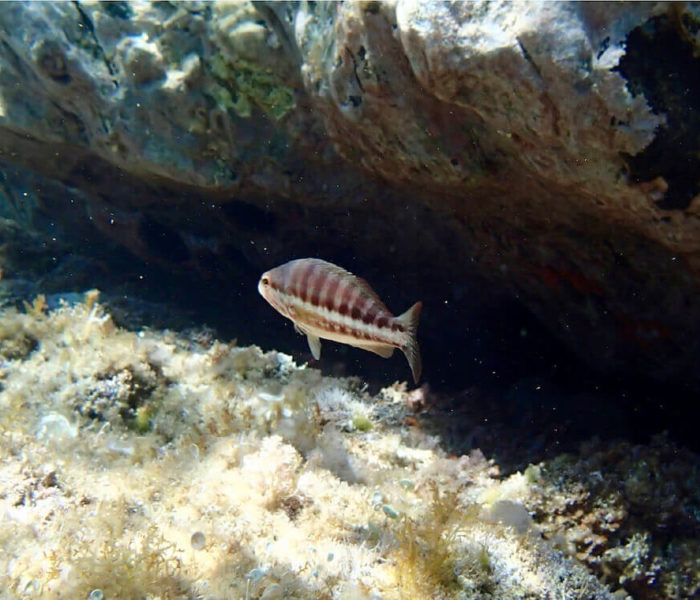 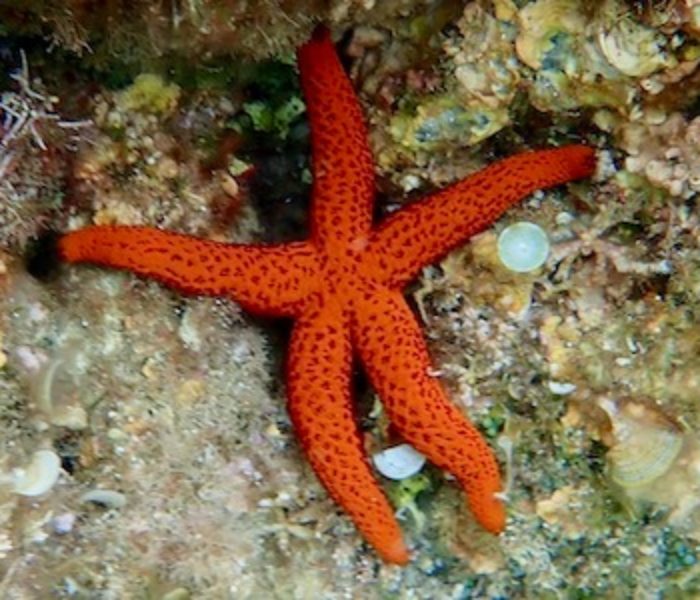 Rocky bay and islets with fish and sea stars 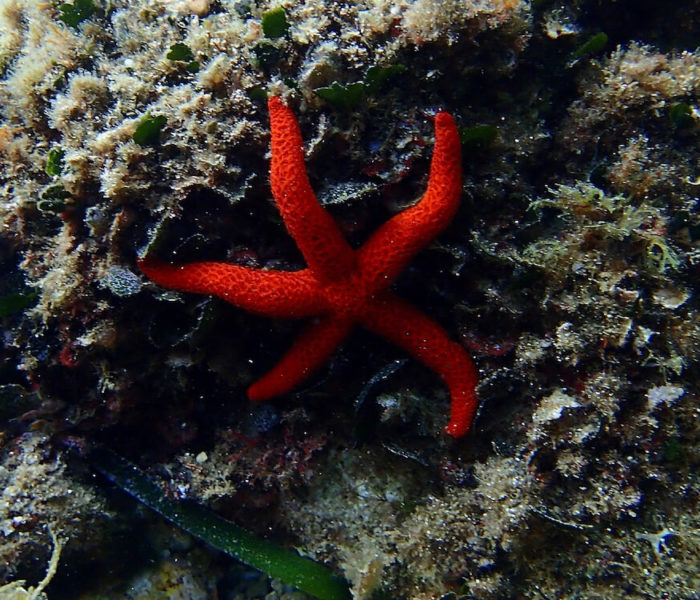 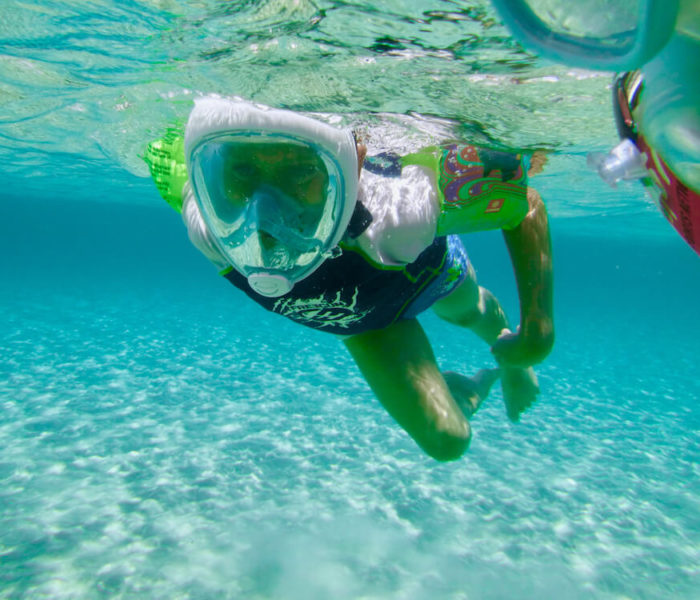 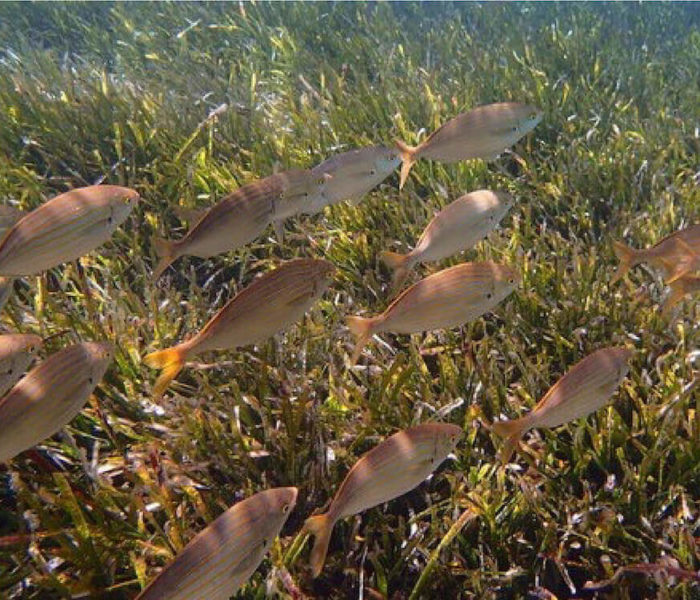