Located off the north coast of Mauritius, Coin de Mire (aka Gunner’s Quoin) is a small island shaped like a sailboat, which offers one of the most beautiful landscapes of the island. At the foot of its cliffs, where the iconic tropicbird nest, you can snorkel on a shallow and rather unspoiled coral reef. There is a great diversity of reef fish, including butterflyfish, angelfish, damselfish, and wrasse.

How to go snorkeling at Coin de Mire island’s reef

Coin de Mire is a small island located about 8km north of Mauritius. It is an uninhabited island, protected by a nature reserve, on which no landing is allowed.

To snorkel at Coin de Mire, you will have the choice between two types of snorkeling tours: the short tour to Coin de Mire only (a few hours), or a combined excursion to Coin de Mire, Flat Island and Gabriel Island (where you can snorkel in the channel that separates the two islands).

For the combined excursion (often referred to as the “three island tour”), prices start at around MRU 2000pp., departing from Grand Baie, Pereybere, or Cap-Malheureux.

Disembarking on the island is prohibited. You will get into the water directly from your boat.

The snorkeling area is located in the southwest of the island. Here the coast forms two small bay, under the shelter of which a coral reef has grown.

At the foot of the cliffs, the reef forms a shallow flat (↕0.5-1m), which then descends in irregular slopes (↕2-4m). On the reef, there is a beautiful diversity of hard coral (often very colorful), and some soft corals.

The remoteness of Coin de Mire means that the corals are in better condition there than on the main island, but some areas are quite degraded due to the high frequentation of the spot (visited by several boats every day).

Many fish can be seen at Coin de Mire reef, including the emperor angelfish, several species of butterflyfish, streamlined spinefoot, Moorish Idols, and parrotfish. Near the surface, sergeants majors, damselfish, and surge wrasse sometimes have fun swimming around snorkelers.

Coin de Mire Island is an uninhabited nature reserve. The “three islands” tour (which combines a visit to Coin de Mire and Flat and Gabriel Islands) generally includes a barbecue on the beach. Inquire when you book. 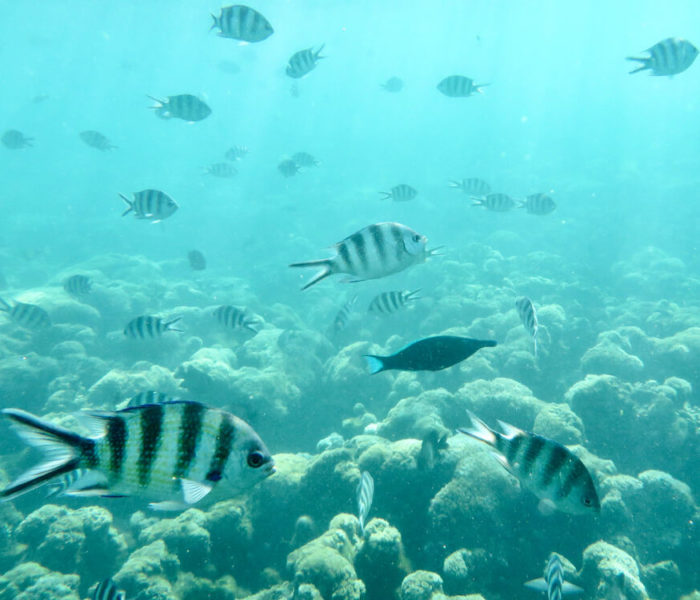 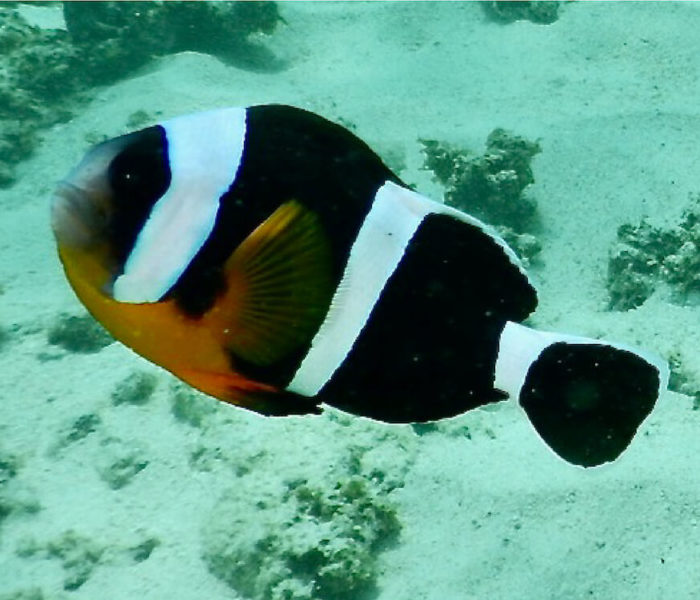 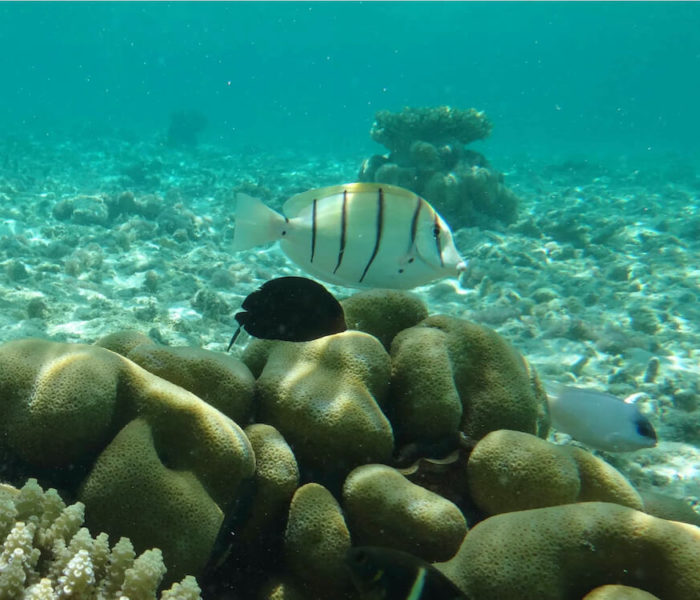 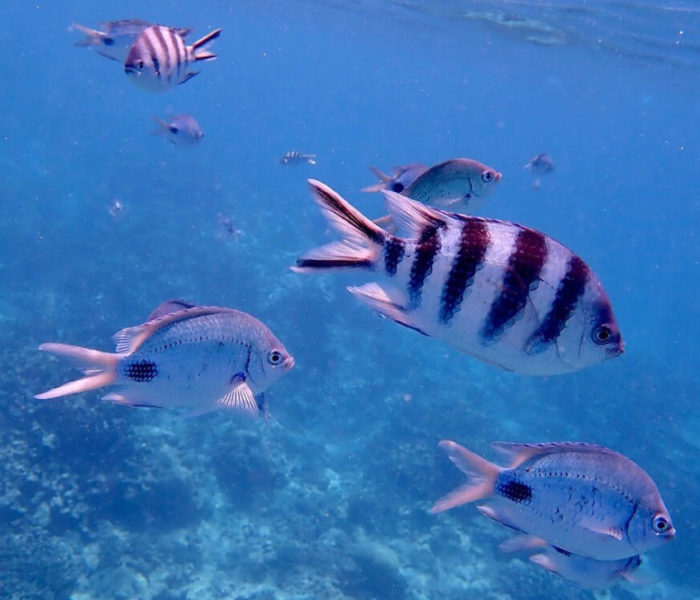 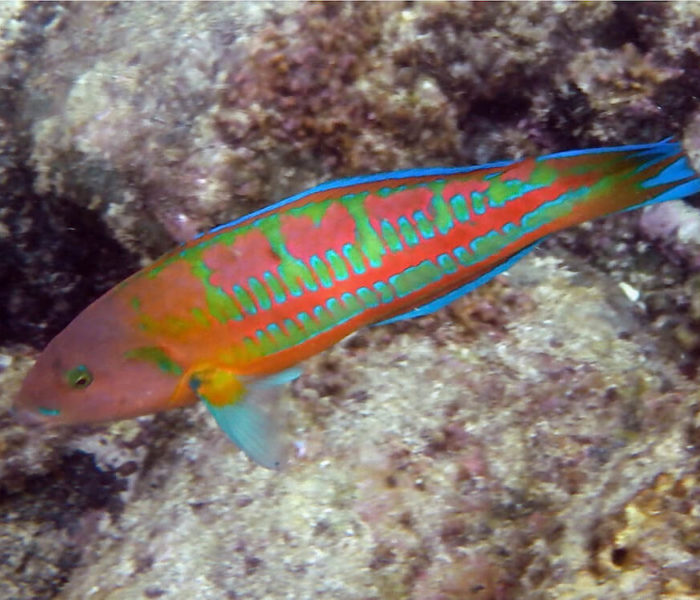 Small rocky pool with a diversity of fish 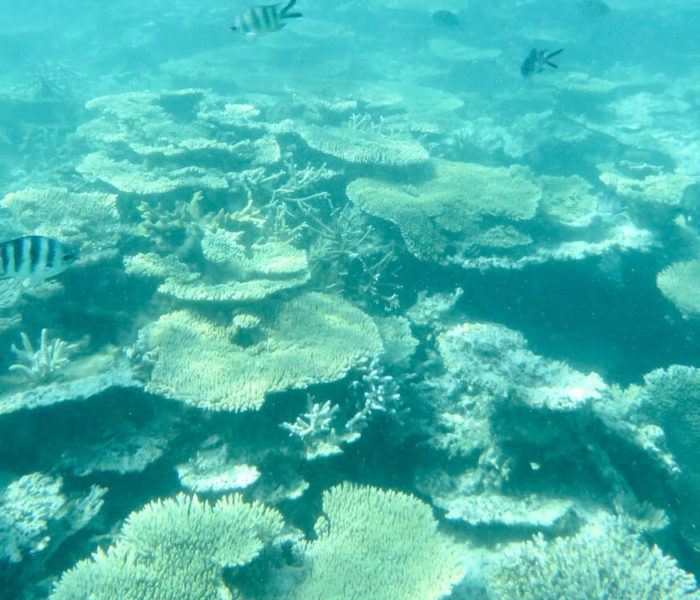