Playas del Coco, popular for its seaside and bustling streets, is the oldest beach community in Guanacaste. Its large gray sand beach does not seem at first glance very suitable for snorkeling. However, it shelters some areas concentrating a captivating underwater life. Around the rocky areas that border the north of the bay and the Tortuga Rock, an isolated reef emerging about 100m from the beach, you may encounter porcupinefish, angelfish, moray eels, and sometimes rays and sea turtles.

How to get to Playas del Coco snorkeling spot?

This spot is located north of the main beach of Playas del Coco, a popular seaside village on the Pacific coast of Costa Rica. The beach is well served by buses. By car, it takes less than 30 minutes to reach the beach from Liberia airport (40 minutes from downtown).

No fee but best not to leave belongings unattended. You can park in any of the Calles leading to the beach, which are named after animals (Calle Mono/Iguana/Pelicano), but parking is at your own risk.

There are many other snorkeling locations around Playas del Coco that are worth exploring. We recommend in particular Playa Penca and Calzon de Pobre, on the small peninsula separating Playas del Coco and Playa Hermosa, as well as Playa Ocotal, a small bay located 10 minutes by car/taxi from Coco city center.

Once on the beach, walk north, on your right when facing the ocean.

As you pass Pacifico Beach Club, look for the rock island/outcropping, emerging some 100m from the shore. This is the first recommended area (area 1 on the map). It is easier to see and better to snorkel while it’s low tide.

To explore area 2, get in the water near the rocks, at the very end of the beach (about 450m after the rock).

There are two recommended snorkeling areas in Playas del Coco:

The main point of interest in this area is Turtle Rock, about 100 meters offshore, emerging in the middle of sandy bottoms (↕10ft/3m). Snorkel around the rock, exploring its drop-offs. A further 100 meters is a tethered swim platform with some very good panoramic views off the beach.

Hawksbill sea turtles can be found sleeping in the crevices, starfish abound, as well as several species of puffers and porcupinefish. Stingrays can be found in the sandy-bottomed areas to the left and right.

Here you can snorkel along the rocks that stretch for several hundred meters along the coast. The drop-offs, overhangs, and small coves are home to many fish species. You will probably encounter in this area damselfish, Cortez angelfish, giant hawkfish, rainbow wrasse, but also small jewel morays hidden in the holes in the rocks.

As in the whole region, the underwater visibility is very variable on this spot. Avoid especially the days following heavy rainfall. Avoid also Semana Santa, when the coast is busy.

The nearest restaurant is Café de Playa, but the town is a short walk away. You can walk up Calle Iguana which pops out by Pueblito Sur/Norte, which has a range of food & coffee spots as well as a mini-mart. 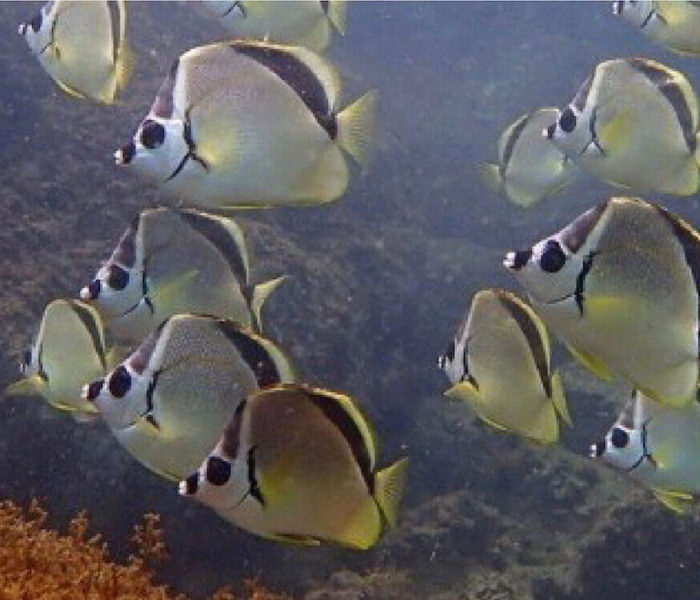 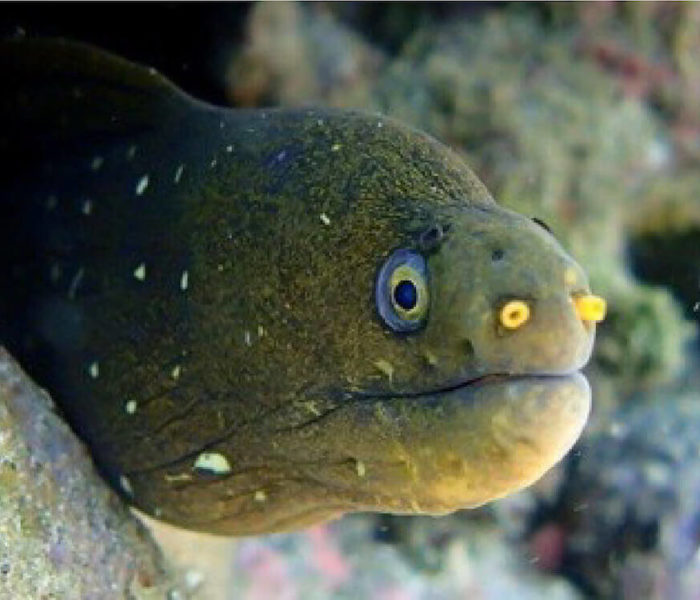 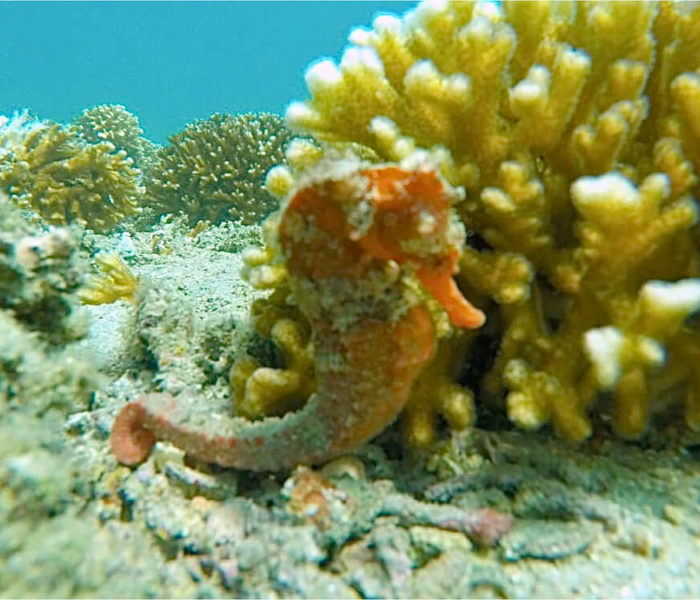 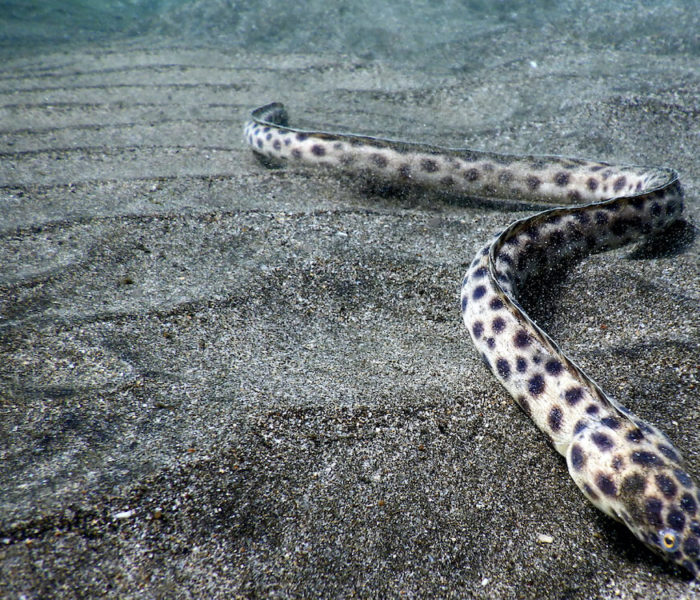 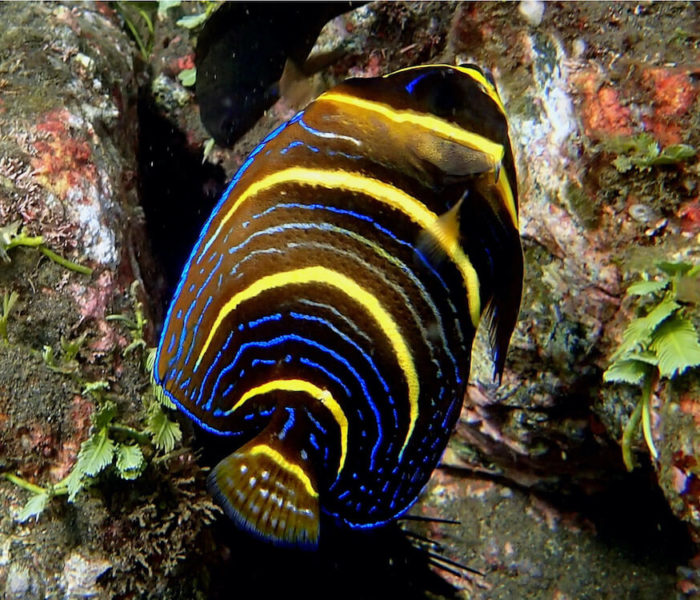 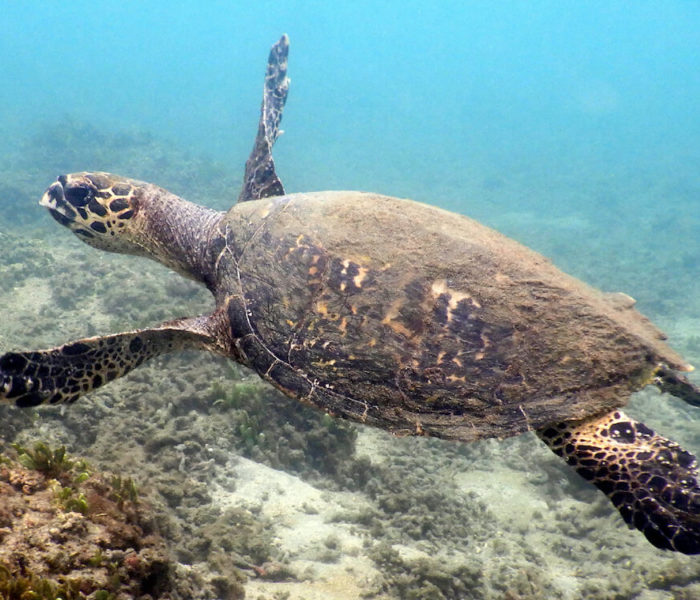 Rock and coral reef with colorful fish, rays and turtles

see all spots in Costa Rica